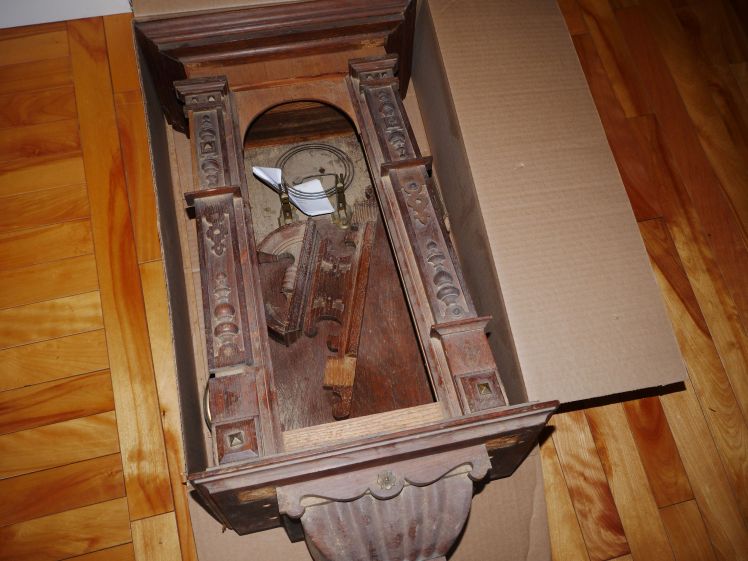 This is what happens when you get a clock in a box. Call it a collection of parts, pieces and dust. This is an antique German Junghans time and strike spring driven clock made in the style of a Vienna Regulator. There is no serial number on the movement, dating the clock to 1899 or earlier (in 1900 Junghans began to number their movements). To some a box of clock pieces is discouraging but to me it is a challenge.

On the morning of 6 December 1917 the SS Mont Blanc a French cargo ship laden with high explosives and Benzol collided with the Norwegian vessel SS Imo in the Narrows, a strait connecting the upper Halifax harbour to Bedford Basin. A fire on board the French ship ignited her cargo, causing a large explosion that devastated the Richmond District of Halifax. Approximately 2,000 people were killed by blast, debris, fires and collapsed buildings, and an estimated 9,000 others were injured.

The result was the largest human-made explosion prior to the detonation of the first atomic bombs in 1945. Nearly all structures within an 800-metre (2,600 ft) radius, including the entire community of Richmond, were obliterated. This clock is a witness to that day. In 1918, Halifax sent a Christmas tree to the City of Boston in thanks and remembrance for the help that the Boston Red Cross and the Massachusetts Public Safety Committee provided immediately after the disaster. That tradition carries through to this day.

It appears that the parts have literally sat in a box for the past 100 years.

The blast not only shattered the glass panels but heavily damaged the box frame. It appears that most of the parts have literally sat in a box for the past 100 years. I cannot imagine when the movement last worked, probably ticking its last on that fateful morning in December. Since the box frame was damaged beyond repair following the explosion, the seller, an amateur woodworker, built a new frame made of softwood and oak veneers some 30 years ago. You can see the lighter coloured pieces in the photo below that were never stained and finished. He admits that he knows nothing about clocks and eventually lost interest in the project. I am impressed with his skills since the work on the frame looks solid and well constructed.

The top centre final is missing, two other finials and some small trim pieces

Why was he letting it go? He said there had been a change in his life and it was time to move on. When I asked him about the history of the clock he said that his wife’s grandparents lived on Princess Place in North End Halifax. Princess Place is further south of the main area of devastation so houses in that area would have sustained heavy structural damage. The clock was blown off the wall by the blast wave. The clock remained in the family all these years, the seller having received it from his wife’s aunt.

I took it home stared at the box for a while trying to decided whether or not I made the right decision. I then set to determine what steps I should take to restore this fine clock. I poked through the box to see what was there and began to itemize the parts, arranging them on the case as best I could and proceeded to clean the case and determine the next steps. I was fortunate to have had someone send me the actual catalog image of the clock which you can see below.

The clock is called the Crispi by Yunghans. Yunghans is a reputable German clock-maker and continues in the watch business to this day. This is what the clock should look like and it will be a excellent guide for restoration. There will be obviously be some subtle differences between my clock and the clock in the catalog when the project is completed but to the casual eye it will look exactly the same.

I have ordered the following parts from Timesavers; 3 new finials in the style that best fits the clock, 2 door hinges, 2 door latches and some trim pieces. I will have to build the bases for the finials from scratch. The lower section of an oak spindle will do just fine. There are other trim items that are missing but I will strategically arrange the remaining trim pieces as best I can.

The best news is that the movement is complete and in working order. The movement ran for a day on a test stand before I stopped it. It needs a very thorough cleaning which will be the next step in this project.

In Part II I will describe cleaning the movement and any issues that may arise as a result of disassembly.

In Part III I will explain the procedures involved in the case restoration once the remaining parts arrive.

This site uses Akismet to reduce spam. Learn how your comment data is processed.

Today's generation is financially illiterate, so I am going to attempt to change that one person at a time.

Discover ©SK's 🆆🅴🅴🅺🅻🆈 🅵🅻🅰🆂🅷 🆂🅰🅻🅴🆂 on our Site | We offer unique graphics and artwork designs on T-shirts, Apparel, Mugs, Bags, Posters & Prints and much more gifts for Whole the family, our T-shirts are available in a huge variety of styles, sizes, colors and designs for all kinds of occasions.

An online book of information, knowledge and news

Today's generation is financially illiterate, so I am going to attempt to change that one person at a time.

Discover ©SK's 🆆🅴🅴🅺🅻🆈 🅵🅻🅰🆂🅷 🆂🅰🅻🅴🆂 on our Site | We offer unique graphics and artwork designs on T-shirts, Apparel, Mugs, Bags, Posters & Prints and much more gifts for Whole the family, our T-shirts are available in a huge variety of styles, sizes, colors and designs for all kinds of occasions.

An online book of information, knowledge and news

A blog on creative possibilities by a writer and musician.