This is a Blackforest shelf or kitchen clock made before the Second Word War. Blackforest is a Canadian clock company.  The Blackforest Clock Company of Toronto, Ontario was founded by Leopold and Sara Stossel in 1928.  Both clock movements and complete clocks were imported from Germany and sold through department and jewelry stores across Canada.  Their son Ed Stossel started working part time with his parents’ company in the 1930s, and later became a full-time employee in the late 1940s.

Some assembly work was carried out in their Wellington Street East factory.  Initially, imported mantel clock and grandfather clock movements were installed in cases made in Kitchener, but later the complete mantel clocks were imported from Germany.  This arrangement was interrupted by the Second World War, which also led to a name change to the Forestville Clock Company in 1941.  During the war years this company imported its clock movements from England, the United States, and even France.  However, starting in the mid nineteen fifties German factories again became the source of most Forestville clocks, with Mauthe being a major supplier. The company did not survive much past the late 1970s.

I found this in a antique shop in Kazabazua Quebec and it was in sad shape. This particular clock would have been the least expensive in the Blackforest catalog. I had an opportunity to go through the Blackforest catalog during my visit to the Canadian Clock Museum in Deep River this past summer and could not find a listing. I have no idea of the model name or number as there is no label on the clock. The only feature it shares with other Blackforest mantel clocks is the metal bezel, numerals and hands. Otherwise it is a one train time-only movement with a minimum number of gears and a unique twisting pendulum adjustment. The movement is as simple as it gets so it is easy to work on.

The photo shows the movement out of the clock and as you can see, it is quite dirty. I am in the midst of dis-assembly, cleaning (in my new Ultrasonic cleaner) and oiling. My initial observation is that the pivot holes, pivots and lantern gears are in good shape and the mainspring seems strong. Not a lot of wear for a 75+ year old clock.

The next photos show the condition of the case when I bought it and the second is the first phase of stripping. You will notice that I did not disturb the decal; it would have been impossible to find a replacement. It was in terrible condition, likely sitting in a attic or garage for quite a few years. The spring was wound very tight and I am assuming at this point that dirt and grime caused it to cease. Although I paid $15 for it at the time it seemed too much after I got it home. Nonetheless, I went to work on it and if I can get it to function it might be worth more than I paid for it. As far as restoring this clock I used a latex dark walnut wood satin and a polyurethane top coat, not what would have been done at the time which likely would have been a dark lacquer finish. This method will be more durable. The first photo shows the case is in a restored condition and as you can seeing it is a striking little clock. 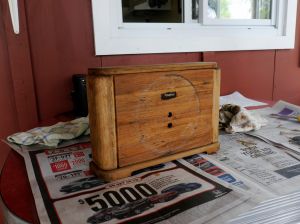 This site uses Akismet to reduce spam. Learn how your comment data is processed.

Movies Review in the Hindi Language

Adventures in, well, just about everything!

random art and photos by me

Movies Review in the Hindi Language

Adventures in, well, just about everything!

random art and photos by me

articles and news from around the World