I have the 30-hour clock bug and my collection of them is steadily growing, but where to put them all? I have not decided where to put this one and for the moment it is on the floor of my work room.

This is a New York-styled Sperry and Shaw 30 hour time and strike, 4 column shelf hour strike clock, measuring 25 1/2 inches in height by 14 inches in width. The 4 free-standing turned columns first drew my attention as I had never seen anything quite like it. While researching the NAWCC site I discovered that this clock was made in or about 1846-47. The label, of which 98% is intact inside the backboard says 10 Courtlandt (not a misspell, there is a second”t”) Street, the company headquarters during the aforementioned period. Sperry and Shaw were business partners and were regarded as distributors and assemblers rather than clock-makers.

They sourced cases and movements, affixed their own stamp on the movement and placed their labels (sometimes over other makers labels) inside the case, a common practice at the time as clocks for the home and workplace both locally and abroad were in great demand.

Not everyone in the clock business was happy with Sperry and Shaw. Consider this excerpt from Chauncey Jerome’s book, History of the American Clock Business.

“These New York men would say that they were agents for Jerome and that they would have a plenty in a few days, and make a sale to these merchants of Jerome clocks. They would then go to the Printers and have a lot of labels struck off and put into their cheap clocks, and palm them off as mine. This fraud carried on for several years. I finally sued some of these blackleg parties, Samuels & Dunn and Sperry & Shaw, and found out to my satisfaction that they had used more than two hundred thousand of my labels. They had probably sent about one hundred thousand to Europe.”

Chauncey Jerome had a few clock-makers/assemblers on his hit list that included Sperry and Shaw and at least managed to sue some successfully.

Sperry and Shaw were not thought of as a high-end clock company but some models like this 4 column New York style were quite attractive, sold well at the time and are sought after today by collectors.

The movement is Jerome-like (Counterfeit perhaps?) and stamped Sperry and Shaw, New Jersey. I measured the plate thickness and compared it to a Jerome in my collection and the plates in this clock are a little thinner.

The narrow brick-shaped weights (4  3/4 inches X 1 inch) fit neatly into channels on the left and right. When I first communicated with the seller, he was not sure if the weights were in the clock. He later emailed to say that it did indeed have weights. I would have passed on the clock had it not come with the weights because the narrow bricks are the only type that will fit into the channels and they would have been almost impossible to source. The weight cords, clearly not original, are old and frayed and will be replaced with simulated gut. How old, well on the first night I raised the strike weight up about halfway and about 20 minutes later I heard a loud BANG. I knew exactly what happened; the cord had snapped and the weight had dropped. Luckily there was no damage. 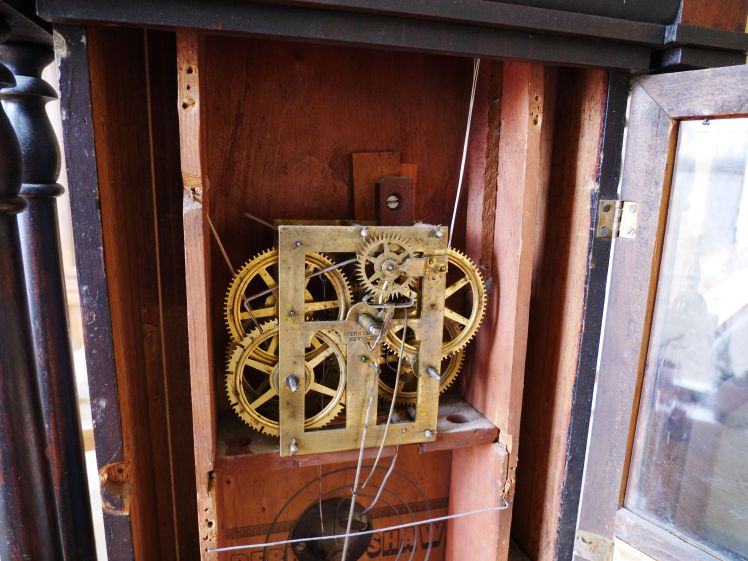 The upper glass appears original and has the waviness you would expect from a clock over 172 years old.

The lower tablet has a cropped image of the Bay of Quinte (Ontario, Canada) taped to the inside – not original but old. The original 18X12 cm steel engraving was drawn by W. H. Bartlett and engraved by J. C. Armytage in 1840; the image can be found here. Since the image is from 1840 and appropriate to the period of the clock, I might just leave it there. It also tells me that the clock likely spent most of its life in Ontario, Canada.

The zinc dial is old though not as old as the clock itself since there is a patent stamp on the back of the dial dated Dec 1, 1863.

There is also a clock-makers inscription that says, “cleaned by Felo Bros, March XX 1901”. Obviously this particular dial would not have been on the clock at the time it was made. A wood dial would have been appropriate for the period.

The case looks good…from a distance. The veneer looks like mahogany or walnut, I am really not sure. There are a few small pieces of veneer missing at various places and mostly on the corners, a common issue. It has a two-tone appearance though the case might have been all one colour when made (??). There is a lot of grime on the darker surfaces and I have to decide whether to leave as-is or take it down a little bit to see what’s there. Attending to the veneer issues should be a fairly straightforward process. The break in the right corner of the base is a crude repair and that will have to be redone.

The movement is dirty but should clean up nicely. There is not a lot of pivot wear on the front plate of the movement but I will learn more once it is out of its case.

There are a number of other clocks in the queue but I am eager to tackle this one.