For the past several years my wife and I have been searching for an authentic antique tall case clock. I finally found one at an estate auction an hour down the road from where I live and seized the opportunity to purchase a clock I knew practically nothing about. In this blog article, I will describe first impressions and the results of my preliminary research.

I have had only one tall clock in my collection, a Ridgeway Westminster chime clock from the mid-1990s. It is stately with handsome lines but it is a modern clock with a contemporary German-made movement and certainly not an antique.

It now has a friend and a very different one at that. New to me is an antique Scottish tall case clock.

McLachlan was an assembler rather than a true clockmaker and sourced cases, dials and movements for his customers according to their desires 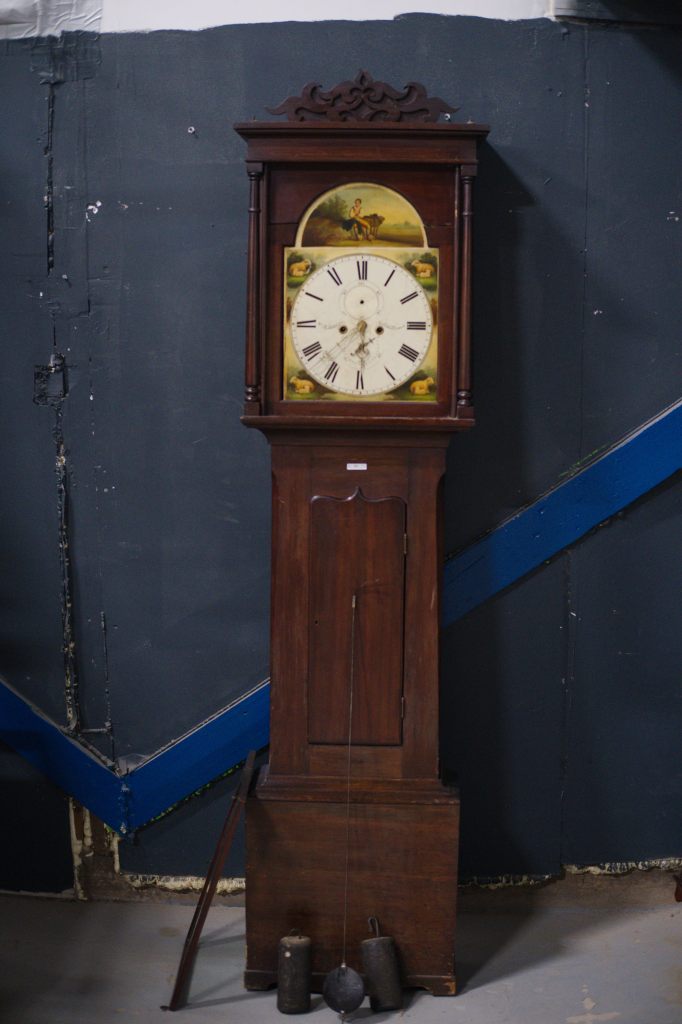 In the above photo, it sits in a corner at the auction house waiting for my arrival. Thankfully someone took the weights and pendulum out before moving it.

It is a classic Scottish design from the 1850s. The removable bonnet is 23 inches at its widest point, the waist is 15 3/4 inches wide and the base is 20 inches wide. The bonnet has tapered columns on either side. The dial access door which covers the entire bonnet swings to the right. The solid wood access door on the waist measures 9 X 24.

To appreciate the size of the clock at just under 90 inches, you can see that it almost reaches the height of our 8-foot ceiling.

The well-preserved sheet iron white dial has painted spandrels, each one depicting a ewe with a lamb and a painted arch top showing a man resting on a rock with two working horses behind him. The clock was evidently made for a wealthy Scottish sheep farmer.

The movement plates are over 3mm thick but there is no makers’ mark. The robust movement is made in the Guild style and movements such as this are commonly called “English bell strikes” with anchor escapement. In 19th century England, the master craftsmen who worked in gold, silver, metals, as well as watch and clock making, were members of their respective guilds. Their handicraft had to be submitted for examination and be passed by their guilds before it could be sold. The Worshipful Company of Clockmakers exercised absolute control, not only over its members but upon all clock making within a radius of ten miles of London and beyond. The penalties imposed by these guilds for infractions were drastic. It is for this reason that movements of this period were almost identical.

It has what is commonly called in the trade a “false plate,” that is, a cast-iron skeleton frame or bracket which is fastened to the front plate of the brass movement. The dial is attached to this false frame. On the plate is stamped BIRMm which refers to Birmingham England the likely birthplace of this time and strike movement.

On the dial are the names Wm McLachlan, Newton and Stewart. William (Wm) McLachlan is a clockmaker. In his book, Clockmakers & Watchmakers of Scotland 1453 to 1900 David Whyte lists McLachlan, William, clock & watchmaker in Newton-Stewart, Wigtownshire as a business advertised for sale on 25 May 1852. McLachlan either retired or passed away prior to the sale date. Newton-Stewart is a former burgh town in the historical county of Wigtownshire in Dumfries and Galloway, southwest Scotland.

It is very likely that McLachlan was an assembler rather than a true clockmaker and sourced cases, dials and movements for his customers according to their desires. Rather than build a clock in his own shop, it was cost-effective, even at that time, to purchase the necessary parts from various manufacturers. The clockmaker then finished these parts and assembled the clock, placing his name on the dial.

As expected the clock has a number of issues. I certainly did not expect a perfect clock for the price and after 170 years, cumulative problems resulting from age and wear are inevitable. Though not an issue, the bottom hand on the dial, which would ordinarily be a calendar function, is not connected internally to the movement. It is very possible that the movement did not originally come with a calendar feature. The “seconds” hand is also missing however but the cast brass hour and minute hand look to be original when I compare this to other Scottish tall case clocks I have seen.

The time side runs well and maintains the correct time. The strike side gathering pallet is not picking up the rack which is my principal concern with the movement. The result is a run-on strike. This will be addressed when the movement is serviced.

The case, which is dull and faded with age needs rejuvenation. The base is the most unsightly aspect of the clock with wear areas, gouges, scuffs and scratches.

As I walk through the restoration of this fine Scottish clock I will be reporting on my progress as I go. Now, where to start! Ah, yes, the case!

Our lives in the present age.